Carver Knowles were thrilled to be sponsors once again for the Pershore Conference alongside Crowthers Accountants and Shakespeare Martineau. Over 150 local farmers and rural professionals gathered on the 16th January for the evening organised by Upton and Pershore NFU to listen to an excellent panel discuss the topic of ‘Zero Carbon Farming’. The evening began with a warm welcome from Clive Davies, the chairman of the Annual Pershore Conference, now in its 25th year. 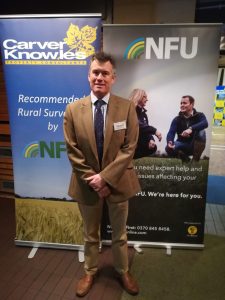 The first speaker for the evening was Professor Robert Pickard. Professor Pickard is currently a visiting Professor at the Royal Agricultural University in Cirencester and Emeritus Professor at the University of Cardiff. He emphasised the role of Zero Carbon Farming is to enable farm businesses to become more sustainable and profitable. Robert identified activities such as increasing biodiversity on the farm, correct soil management, use of the appropriate science and the use of effective communications could combined increase success within the farm business and result in progress.

The second speaker of the evening was Nuffield Scholar and Farm Manager at Overbury Enterprises, Jake Freestone. Jake began by explaining that Britain is the first nation to propose cutting greenhouse gas emissions to zero, promising to do so by 2050 however, it has recently announced that it is the NFU’s ambition to achieve net zero for agriculture by 2040. Jake informed the audience that emissions from UK farms currently amount to about 10% of UK Green House Gas emissions, but in stark contrast to the rest of the economy only a tenth of this is carbon dioxide. With technology becoming more popular in todays society Jake identified different calculation tools that could help UK farmers measure the carbon footprint of their holding. These tools can be used to analyse the farming activities that release the highest percentage of carbon into the atmosphere and therefore help farmers identify where improvements could be made.

The final speaker was the NFU’s Deputy President Guy Smith. Guy spoke about his arable farm which once held the record for ‘The Driest Farm in Britain’. Guy went on from this to stress that climate change is arguably the greatest environmental challenge facing the world and British farmers are now facing increasingly frequent weather extremes. Guy highlighted the importance of resource management on farms to reduce the amount of carbon being released into our atmosphere such as Agroforestry, hedgerow management, zero tillage and flock health and fertility to name just a few. Lastly Guy addressed the new Agricultural Bill that was introduced to the House of Commons and given its first reading on Thursday 16th January 2020.

The evening was concluded with questions from the floor hosted by the conference chairman Clive Davies, sparking interesting debate on the topics covered and a vote of thanks from sponsors Shakespeare Martineau.

If the event has inspired you to make changes within your business then please do not hesitate to get in touch either on 01684 853400 or by emailing enquiries@carverknowles.co.uk to see how we can help.